Skip to Content
Home Featured When NOT to travel to China, and the solution if you are

Christine Surlien 7 Comments on When NOT to travel to China, and the solution if you are

You did what? Booked a trip to China during one of the major holidays, are you mad?!

This could be a likely reaction from someone who knows China well when told you are traveling around May 1 or October 1. Why? Because it should, for your sanity and health, simply be avoided.

You know there will be a lot of people in China, and you sort of prepare for that. Some travelers prepare so much that they almost get disappointed when they don’t experience the tidal wave of Chinese they were picturing. I’m honestly not sure what exactly they were picturing, but I have heard the question, “Where are all the people?” more than a few times.

One solution is to take the metro during rush hour and you will regret ever wondering. Another option that will make sure you are surrounded by Chinese people at every sight and every type of transportation is to travel during China’s national holidays.

The Chinese people don’t have a lot of holidays, and hardly any flexibility on when to take them. The holiday calendar is basically the same for every student, factory, and office worker, and centered around historical and cultural dates. Some, like the Chinese New Year, Dragon Boat Festival, and Moon Festival, follow the moon calendar and will change every year. These holidays have a long history, are of cultural importance and often family-oriented. Of course, people might spend the days off visiting sights and being about, but most people traveling are on their way home. Or not traveling at all, because they are home!

Don’t take it lightly that they are just “on their way home”, though. During Chinese New Year hundreds of millions of people are trying to get train tickets in order to get to their families in time. The big cities are almost empty of people, so it’s not so bad for sightseeing, but stay away from train stations and airports! In 2014 New year falls on January 31.

May 1 (International Worker’s Day) and October 1 (China’s National Day) are holidays created a few decades back by the Chinese government so workers would start spending more of the money they were now making in the new economy. Often referred to as Golden Weeks for the amount of cash 700 million people hand out to travel and to see the sights and wonders of China.

One of the reasons so much cash is spent these two holidays is because the hotel prices double or triple at the most popular places, and air and train fares are pushed up by demand.  For foreign tourists it’s not really the money, but the crowds that are the problem.

On October 2, 2012 around 182,000 people entered the red gates of the Forbidden City in Beijing. On one day! Can you even picture it? I can, because I once visited the terracotta warriors in Xi’an on October 3, and let’s just say there were other tour groups there as well that day.

If being surrounded by big groups of Chinese wearing identical sun hats is not your definition of fun, you should therefore rethink when exactly you want to go to China. 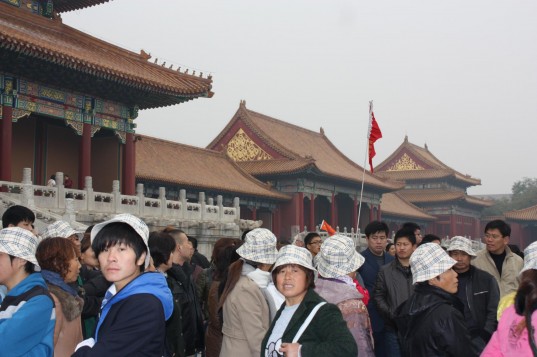 Oh!
Okay, so now you just looked at your ticket and realized you’ll be traveling around China during one of the Golden Weeks. Before you start to panic, remind yourself that you are going to China to meet Chinese people, right? And with the right attitude, it will be fun.

Here are a few tips:
– Prepare for queues and delays, on train, planes, buses, and everywhere Chinese tourists will be. Rethink your schedule and make the most of the places you get to see.
– Practice “standing” in line from day one. You’ll never get any entrance tickets by being polite. Read my super tips here.
– If you want pictures of the sights without Chinese tour groups blocking the view, buy postcards. The sky will be a lot bluer on them as well.
– Repeat the mantra: Comedy is tragedy + time. You will get good stories out of this.
– Prepare well and bring enough snacks to keep your blood sugar levels high, and take frequent rests.
– Start a competition with your travel companions on who can be photographed the most.

In my opinion, I think China can be visited all year-round. Depending on where you are going, of course, since some places can be dangerous during certain seasons, but never let the calendar stop you from planning a trip to China (maybe except the days mentioned). Spring and fall are high seasons due to the comfortable climate, but every season has its pros and cons, and if you don’t like winter, it is always comfortable down south.

Did you enjoy this? Sign up and never miss a blog post again!
I'll send you regular inspiration and help to plan and prepare an unforgettable trip to China – whether you've set a date, or are still just dreaming of going...
BeijingChinaChinese holidaysChinese New YearChinese peopleForbidden CityGolden WeekMid-Autumn Festival

Christine has studied Chinese culture and language extensively. She has spent two years at The People’s University of China in Beijing, done five years of Chinese studies at the University of Oslo, and has her masters degree from Hong Kong University. She has been associated with KinaReiser, Norway’s leading agency for travel to the The Far East, for a decade. She was also employed at the administration of the Norwegian Embassy to China for two years, before relocating to Washington DC with her diplomat husband and their two children.